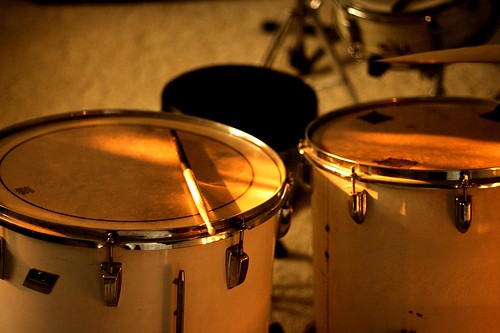 This project is showcasing that I know how to use all of the new skills from the Lesson 7 GragaeBand packet, which mainly focuses on timing, rhythm and loops. Skills like, having a track follow the rhythm of another, or turning an audio or MIDI track into a loop and adding it to your Apple Loops.

A groove track causes other tracks in your composition to follow the same timing, and the feel of that track. It’s good to make a groove track your drummer track but it can be any track. By right-clicking on the track header name, like in the picture below, you can choose show groove track, under Track Header components.

After that you will be able to “star” a track, by hovering over the left end of the track header, to be the groove track and check which tracks you want to follow that groove. 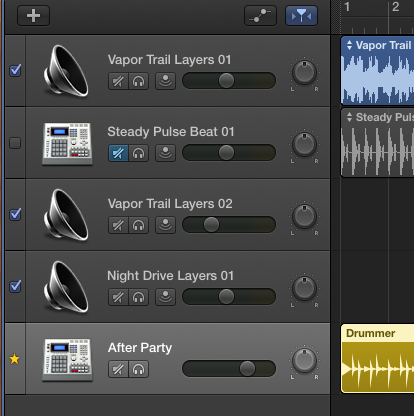 Following The Rhythm of Another Track 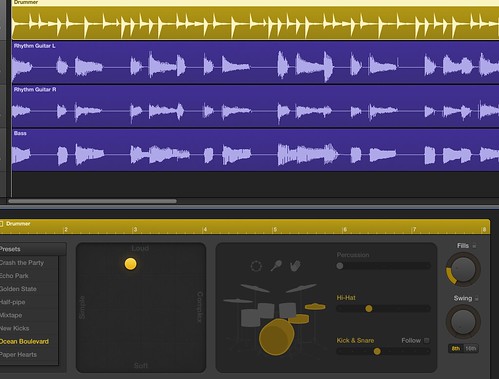 Going down to the drummer editor, you will see a check box next to the word follow. 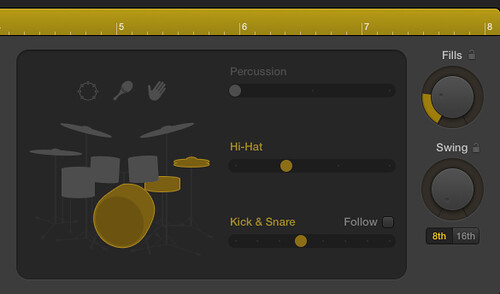 After checking the box, you can choose which track you want the drummer to follow in the drop menu below. 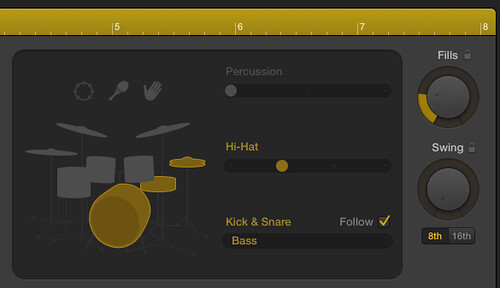 This setting allows you to over-dub and merge any track. It is especially helpful if you are making your own drum track. To make sure your settings will allow you to merge tracks, go into the preferences for GarageBand. 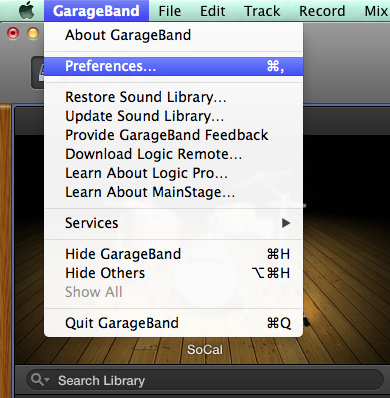 You should see these two drop menus. Make sure they are both set to “merge”. 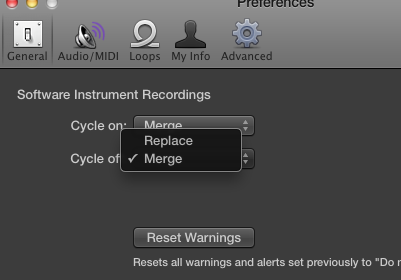 Exit out of the preferences and create your track, make sure cycle mode is on and is stretched out to however many measures you need. Start recording.

When the cycle goes back you can keep recording adding on to what you already have. Make sure not to stop recording in the middle, otherwise you can’t merge into that track anymore.

Record Arpeggiated Drum Beats
If you don’t want to make the whole drum beat by yourself, you can try using the arpeggio option which will play multiple sounds in a specific pattern.
Make sure you have smart controls up.

And then on the far right you will see a little pyramid looking button.

Clicking on that will turn on the arpeggiator, and next to it a drop menu should appear. Use this to choose what kind of pattern you want the arpeggiator to do for you. 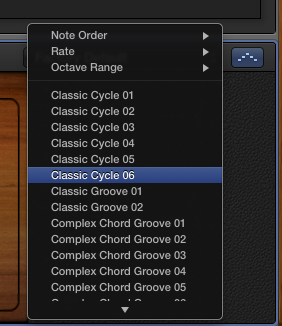 Then just start pressing notes and see what sounds good to you.
Make Audio & MIDI Regions Loop Ready
To make a track loop ready, you need to make sure its timing is good so that it won’t fallout of beat with other tracks or loops, and it needs to begin and end on the beginning of a measure. To help with hearing how it will sound as a loop, turn on cycle mode, and listen and edit from there.

Add Tracks to the Loop Library
After making your track loop ready, you can add it to your Apple Loop library.
Have your track ready by selecting it. Make sure only that track is selected. 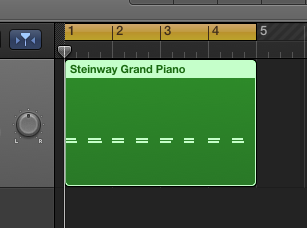 Go to “file” and click “Add to Region to Loop Library”. 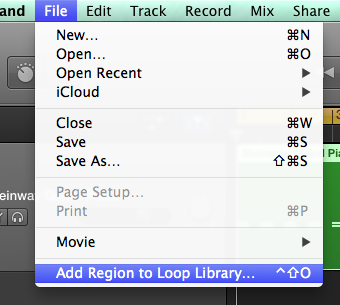 After that, this next image should pop up. Use this to choose if this track is going to be a one shot or a loop, keep in mind orange regions can only be turned into one-shots. Select your scale, genre, mood, and instrument descriptors here, then press “create”. 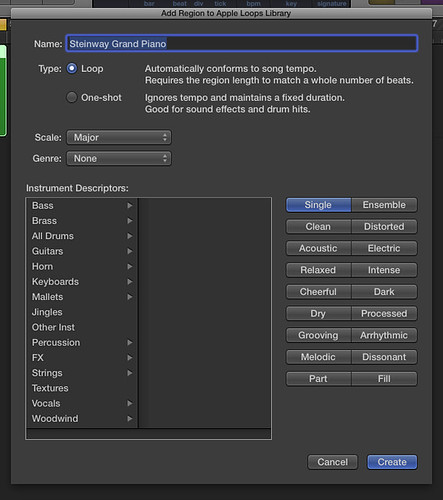 To view your loops, open your loop library and click the drop menu that says “Loops”, you will see an option that says “My Loops”. 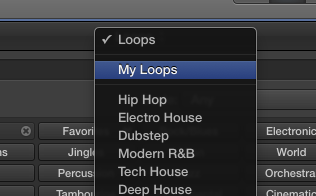 And there you go! All of your loops added to the loop library. 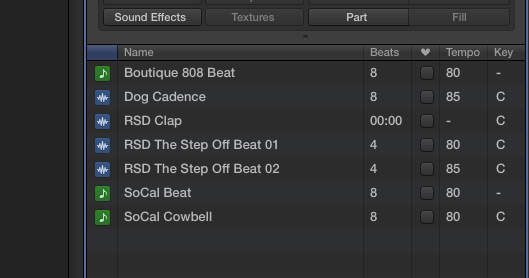 Working With the Tempo
If you want your tempo to change throughout your project here’s what you do.
Go up to “track” and click ” Show Tempo Track” 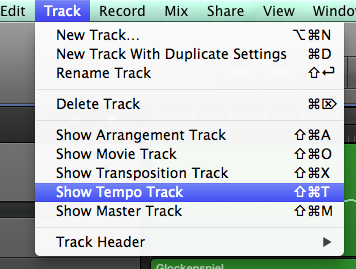 Afterwards, a new track above your first track will appear. Double click on the blue line to create a point that you can drag to change the tempo where you want it to. Drag the line in between two points, to make the transition more gradual.

Meter- the rhythmic structure of music, like the “heart beat” of the song.

Pacing- Similar to tempo, more of the “feeling” then actually speed

Tempo- The number of beats per minute in a song. The “speed” of the song

Hip Hop- a genre of music that features rapping, with an electronic background

Out of the Pocket- Not on beat

Quantize- The process of putting notes not on beat, on beat

Single Take- When you only do one recording

Overdub- When you record over another recording, or track

C1 Octave Range- A range of notes starting with C1, ending at C2

Drum Kit- A set of percussive drums and other instruments

Kick Drum- the big, lowest sounding drum on a drum kit that you kick with a pedal

Cymbal MIDI- The electronic recording, or computer generated sound of a cymbal, to be used on computers

Loop- a sound that “loops” or is repeated after it has finished seamlessly like it never ended. Usually a few beats or measures long

Arpeggiation- playing the notes in a chord in succession

Sound Effects- Sounds made artificially to be used in movies, songs, etc.

One Shot Sound- A type of loop or sound, that isn’t meant to loop. Which is why it’s called a “one”-shot

I learned different ways to make drum beats on my own, or how to have a pre-made drummer track follow a specific track. I also played around with the multipass drum beats. I’ve been wondering how to adjust tempo in the specific part of a project and now I know how to do that.